You are here: Home / Suspense / Hellbound by Chester D. Campbell 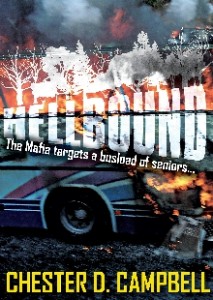 How Did You Come up With Your Characters?
For Bryce Reynolds/Pat Pagano, I wanted a character who had demonstrated his courage and determination, someone with close ties to Las Vegas gambling (through his father), and a sharp enough investment counselor to attract attention from the New Yorkers. The female lead has a background similar to my own in where she lived and went to school.

Author Bio:
Chester Campbell got bitten by the writing bug when he started work as a newspaper reporter while a journalism student at the University of Tennessee. That was 68 years ago. He has worked as a newspaper reporter, freelance writer, magazine editor, political speechwriter, advertising copywriter, public relations professional and association executive. An Air Force intelligence officer in the Korean War, he retired from the Air Force Reserve as a lieutenant colonel. He is the author of five books in the Greg McKenzie mystery series and two books in the Sid Chance series. He also has a trilogy of Post Cold War political thrillers. His first Greg McKenzie novel, Secret of the Scroll, won a Bloody Dagger Award and was a finalist for Foreword Magazine’s Mystery of the Year in 2003. The first Sid Chance book, The Surest Poison, won the 2009 Silver Falchion Award at the Killer Nashville Mystery Conference. He served as secretary of the Southeast Chapter, Mystery Writers of America, and is past president of the Middle Tennessee Chapter of Sisters in Crime.

Links to Purchase eBooks
Link To Buy Hellbound On Amazon

Sign up for our newsletter to find out about great mystery books. Once a month one subscriber will win one book from our site.
Filed Under: Suspense Tagged With: bus tour, Chester Campbell, fbi, hurricane, MAFIA, New Orleans