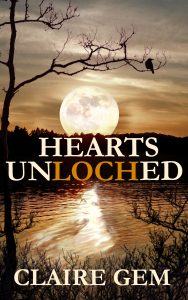 How Did You Come up With Your Characters?
My heroine, Kate Bardach, actually looks very much like my stepson's wife. As a matter of fact, I even inadvertently copied some of her mannerisms. My step-daughter-in-law is Jewish, and we are a Christian family. My oldest brother also married a lovely Jewish woman back in the 1960s, so I recreated the ethnic/religious combination when Kate gets involved with Marco Lareci.

Marco is Brooklyn born, Italian American, with a Catholic upbringing. He reminds me very much of my uncles and cousins in many ways. A tough, smart, handsome go-getter with a soft, romantic heart. One who believes in forever kind of love.

Book Sample
"What happened to you back there?”

Marco sat on the white leather loveseat in front of a massive slate fireplace covering one entire wall of Kate’s lake house. The adjacent wall was glass, floor to ceiling, and framed in rustic cedar. Although it wasn’t yet dark, already the lights from Loch Sheldrake’s few surviving businesses on the main drag blinked in the distance, dancing in long, colorful spires on the water.

He had no idea what had just happened. One minute, he was getting ready to discuss a business deal with a pretty lady who just happened to have the exact qualifications he needed to begin renovations on his latest investment project. The next, he’d been consoling a woman who sounded as though her heart had recently suffered the loss of a parent, a child, or a spouse.

Yet, she had recovered quickly, insisting on driving her own car the half-mile up the road to her lake house. He’d followed, confused and more than a little intrigued. Once inside this lavish summer cottage—one as nice as his upscale loft in Manhattan—he’d watched as she pulled a bottle of Pinot Grigio out of a countertop wine chiller, pulled the cork, and poured two glasses.

He’d known Kate Bardach for only four hours, but he knew better than to offer to open the wine. To wait on her. To try to play chivalrous, especially once they were on her home turf.

Although she’d flashed those brilliant, blue eyes up at him once after his question, she didn’t reply until she’d handed him the chilled glass and held up her own to toast.

He didn’t even like Pinot Grigio. But then again, she hadn’t asked.

“To memories, old and cherished. And mostly, to those better left behind,” she said, fixing him with a sultry expression before performing her sexier-than-hell slow blink again.

He clicked his glass to hers and replied, “Hear, hear.”

She sat beside him, though the love seat was big enough to where they were nowhere near touching. After she’d leaned back and drained half the glass in three swallows, she tipped her head back, closed her eyes, and sighed. Then she leveled her gaze at him.

“Okay, so, I have a problem with old buildings, sometimes,” she began, leaning forward to set her glass on the soapstone coaster. When she did, the red sweater dress that had been hiding underneath the Burberry coat flapped open along its deep-V neckline, revealing a sumptuous view of two generously rounded mounds.

“What kind of problems?” he asked, struggling to keep his brain in control over his hormones.

She looked down into her lap, where her neatly manicured hands were folded like a schoolgirl. Her long lashes spread over her cheeks like black fans. This was a side of her he hadn’t figured on.

Demure. Huh. She was all balls and brass at the racetrack.

“I know it might sound crazy to you, Mr. Lareci. But I believe buildings—homes, old houses, or places like your hotel—have their own . . . well, let’s just say . . . personality.” She lifted her gaze to his. “And I won’t work on a project where the spirit of the place isn’t welcoming.”

His bark of laughter brought back the balls and brass, sparkling in her narrowed eyes.

“So, you’re saying my hotel’s haunted?” he scoffed, not meaning his tone to come off as deprecating as it did. But he couldn’t hide his smile as he shifted in his seat and took a long draw from his own glass. “I’d imagine that could present a real problem in your line of work from time to time.”

“Yes,” she said, nodding slowly, her tone deadly flat. “It most certainly does.”

Definitely not what Marco wanted to hear, especially from this bombshell of a woman whose very presence was about to induce him to spill his seed in his own pants. It had been a while—a
very long while—since a woman had this effect on him. Even his live-in lover, Arianna, a few years back. She’d been sexy as hell and a superlative lover, murmuring to him in delicious Italian obscenities as they’d coupled.

But the spark hadn’t been there…not like this. And this one, from what she was revealing to him, might well be a bit wacko. In addition, she was fiercely independent, arrogant, and too smart for her own good. Or for anyone who tangled with her.

Yet he couldn’t block out the words. This woman is something special. They rang inside Marco’s head as clearly as if he were listening through earbuds.

He knew he shouldn’t. Marco knew he should finish his wine, say goodnight, and find a room nearby. And he was usually pretty good at letting his mind overrule his hormones. But tonight, something else was urging him forward. Beyond his comfort zone. Beyond his logical boundaries.

Author Bio:
Claire writes intensely emotional romantic novels. Her vision is to transport her readers into another place and time, creating characters so real, readers miss them when they reach The End. Her heroes are hot, & her heroines strong and brave: a combination producing the spark to fan the flames of your most intense romantic fantasies. Claire's characters are human, just like you & me. They make mistakes, they get clumsy sometimes, & they're not too proud to laugh at themselves & each other.

The keyword here is EMOTION. Big on the *Sigh* factor, Claire's stories aim to hit you straight in the heart and leave you smiling through happy tears.

She writes in two genres: romance w/a ghostly twist, and sexy contemporary. Claire's books are like a thrill ride at a theme park. Whether it's spooky-scary, angst-ridden relationships filled with gut-wrenching turmoil, silly chuckle moments, or hot-flash-inducing sex, Claire guarantees to take you on an emotionally intense romantic journey.

Sign up for our newsletter to find out about great mystery books. Once a month one subscriber will win one book from our site.
Filed Under: Romantic Mystery Tagged With: Claire Gem, contemporary romance, ghost story, paranormal romance, romantic mystery, romantic suspense