You are here: Home / Mystery/Suspense/Thriller Series / Fireman Down – Incipient by Stan Loveday 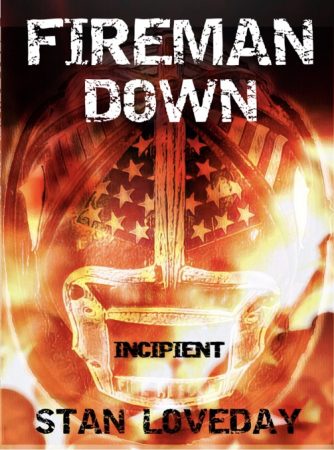 A late season storm starts a disaster in motion. Where human error had left the door open for a catastrophe, was it truly just bad luck that caused his friends death? Or was it something more? Was it greed that drove the pyres of these fires higher. At least one fireman was dead, many more are injured. As a firefighter struggles to clear his departments good name, others conspire to stop him at all costs.

From a story that could have been ripped from the pages of the news, our intrepid hero Kent Ward works to find out the truth over why his friend had died. Why the fires seem to target the firefighters. Who was behind setting all those fires? Were they untouchable? Just how high did the corruption go?

Follow along as Kent tries to bring those that are responsible to justice, before they remove all traces of evidence. Can he flush out the firebug before he becomes their next casualty? Locked fire escapes! Malfunctioning radios! Armed residents. Kent is facing corruption all the way to the top. Can he find a way to bring honor back to his profession?

This extremely raw and visceral story follows the camaraderie and life threatening events that real firefighters face every day. A story that will leave you looking to hide under your covers at night, unable to put the book down.

What Inspired You to Write Your Book?
Having responded on thousands of calls over my years with the fire service, so many stories of love, loss and death are lost to the pages of history. Bringing some of those stories to the light of day shares those experiences with my readers. While the names and locations have been changed, the action is drawn from real life.

How Did You Come up With Your Characters?
Many are a mix of people that I have either met or worked with over so many years. Some very notable, while others were but in passing. But every one had a story behind them. Whether their personalities or their involvement, each adds to the mystery of my stories.

Book Sample
As the figure slid to a stop on the left side of the building, it had dropped the pack that it had carried on the ground as the light started back up. Shielded by the position of the building, it was now hidden in the shadows from prying eyes.
The figure reached inside its tattered bag and removed two small bottles. The faded words on one of the bottles proclaimed “Danger” while the other bottle was simply marked with “Flammable”.
With a fluid motion acquired only by repeated tries, this foreboding of death splashed the foul smelling liquid from both of the bottles onto the building. Rivulets of both clear and red tinted liquid covered the clapboard wall and carried across the darkened light fixtures that bracketed both sides of the weathered door.
As the last of the liquid struck the door, a massive crash of lightning and thunder stuck almost too close. The rattle of the swing sets behind the figure were only offset by the haunting sounds the spring loaded rides made in the wind.
“Perfect!” Was all that had escaped the figures mouth. Shoving the bottles back into the pouch, it moved backward. With a flip of a wrist, it had lit a small leaf and tossed it into the liquid. A muffled woof sounded as the clear liquid caught fire.
The noise was lost to the lasting rumble of more distant thunder. The pale blue flames streaked up the wall and just as quickly had dripped down to the base of the door. But the devil himself was in a full run before either the security light restarted or the blue flames had reached the red liquid.
The red tentacles caught fire with a burst of orange that started to reach out at the short overhang that extended above the lights.
Before the glow of the increasing fire had reached out to pierce the darkness, the solitary figure had faded back into the shadows of the brush. There it stood just past the point of being betrayed by the glow. A grin had started across it’s face.
If one had stood there to the front of this aberration, the reflection in its eyes as the flames exploded in intensity would have made their blood turn cold. The evil that had been hid so well in the light of the day, now all but screamed out into the night, HERE I AM! HERE I AM! HERE I AM!
But it was only momentary, as by the next crack of lightning, the figure had disappeared into the darkness, well out of sight.

Author Bio:
As a retired Firefighter/Paramedic, Stan Loveday lives aboard an aging sailboat in the Florida keys. He is the author of “Dark Wave” and his new novel “Fireman Down”. With over 30 years of experience in the fire service, he now travels aboard his sailboat ‘SE of Disorder‘. An experienced sailor with thousands of sea miles under his keel, he brings real life experiences to the pages of his works. When not traveling the Caribbean, he resides on the waters of Key West, Florida.

“My writing is drawn on real life experiences to immerse the reader into the novel and feel the terror of when things go south. All that is lacking is the feel of salt water as it hits your face, or the heat from the flames driving your heart rate higher.”

Sign up for our newsletter to find out about great mystery books. Once a month one subscriber will win one book from our site.
Filed Under: Mystery/Suspense/Thriller Series Tagged With: arson, corruption, death, fire, firefighter, fireman, high rise, murder, Stan Loveday, storm