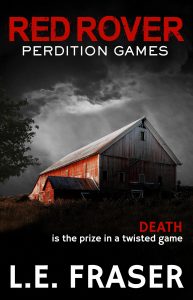 An ex-football player is brutally murdered. A famous ballet dancer inexplicably commits suicide. The only link between the two deaths is Roger Peterson, a famous psychiatrist with secrets that will destroy his reputation.

When the doctor hires Toronto private investigators Samantha McNamara and Reece Hash to prove his innocence, a ruthless killer thrusts them into a terrifying nightmare. To expose the truth, Sam and Reece must outwit a psychopath whose greatest pleasure is the game. The rules are simple: trust no one and stay alive.

Sign up for our newsletter to find out about great mystery books. Once a month one subscriber will win one book from our site.
Filed Under: Featured Books, Thriller Tagged With: crime-fiction, fiction, LEFraser, murder, mystery, psychological thriller, serial killers, suspense, thriller