You are here: Home / Cozy / Featured Book: One for the Money by D. B. Borton 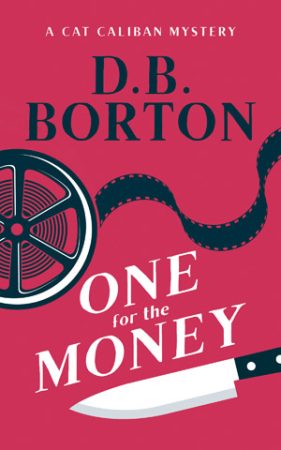 After decades of marriage, motherhood, and grandmotherhood, Cat Caliban is looking for a new career. Since suspicion is second nature to any woman who’s raised three kids, detective work seems a logical choice. So, she sells her suburban house, buys an apartment building in a “transitional” neighborhood, and begins her training, only to discover a dead body in an upstairs apartment. What’s the connection between a murdered homeless woman and the Golden Age of Hollywood silent movies? Cat races to discover it before the killer can strike again.

In this first book of the popular Cat Caliban series, Cat assembles her colorful cast of helpers and neighborhood hangers-on. See why reviewers and readers have called ONE FOR THE MONEY “amazing,” “really funny,” “tone perfect, “a wonderfully entertaining read,” and “a light-hearted, laugh-out-loud romp of mystery,” and why Pat Luboff of UNDERRATED READS writes, “I’m going to say something that I don’t think I’ve ever said about a book: I loved every word! It gave me such a feeling of joy as I read it.”

Buy One for the Money Here

Sign up for our newsletter to find out about great mystery books. Once a month one subscriber will win one book from our site.
Filed Under: Cozy, Featured Books Tagged With: borton, cozy mystery, D. B. Borton, female detective, feminist mystery, humorous mystery, senior detective, woman detective