You are here: Home / Cozy / Featured Book: Mai Tai One On by Jill Marie Landis 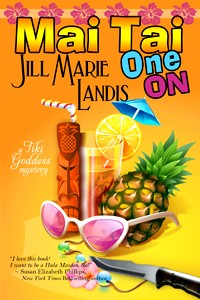 Six months ago, if anyone would have told Em Johnson she’d end up divorced, broke, and running the dilapidated Tiki Goddess Bar on the magical North Shore of Kauai she would have told them to shove a swizzle stick up their okole. As if all that isn’t bad enough, when an obnoxious neighbor with a grudge is found dead in the Goddess luau pit, suspicion falls on Em and the rest of the Goddess staff. With the help of a quirky dance troupe of over-the-hill Hula Maidens, Em and the cast of characters must ban together to find the killer and solve the mystery before the next pupu party.

Buy Mai Tai One On Here

Sign up for our newsletter to find out about great mystery books. Once a month one subscriber will win one book from our site.
Filed Under: Cozy, Featured Books Tagged With: cozy, crime, hawaii, hula, Jill Marie Landis, mai tai, murder, mystery, tiki