You are here: Home / Cozy / Featured Book: Geared for the Grave by Duffy Brown 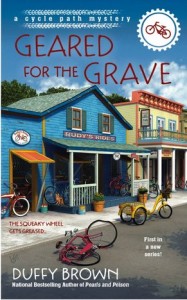 discounted 1.99 book one in Cycle Path Mysteries
Where biking takes a deadly turn

Shakedowns cover-ups and big fat lies keep bodies hidden on Mackinac Island and bike-riding tourist oblivious to it all.

To boost her chances for a promotion, Evie Bloomfield helps her boss’ dad with his bicycle shop on Mackinac Island. The good idea turns bad when dad winds up prime suspect in a murder. To save her job Evie takes over the failing shop though she’s never ridden a bike, finding a killer though she can’t find her keys in her purse and discovering why someone is out to frame Dad. Can Chicago Evie survive being on an eight-mile chunk of land with no cars, lots of horses, bikes, fudge-eating tourists, the resident sage writing her eulogy and a killer who wants her dead?

Buy Geared for the Grave Here