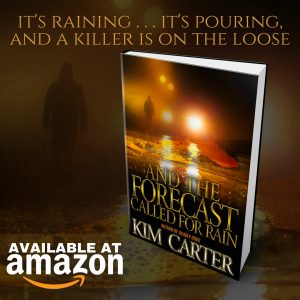 Detective Jose Ramirez and the Sierra Hills Police Department are scrambling for leads on a killer who has already struck five times, each time leaving his signature trademark: large butcher knives piercing the abdomens of his young female victims.

Profiling the killer is proving to be difficult, and Detective Ramirez knows that it’s only a matter of time before their perpetrator strikes again.

As if Ramirez isn’t frustrated enough, to his dismay, he is assigned a partner. Officer Daniel Chatham, a handsome, young man, fresh out of grad school, has pulled some strings to join the division and becomes Ramirez’s, right-hand man. The lead detective’s anger slowly begins to dissipate as he discovers the book smart kid can be quite the asset.

With Ramirez’s experience, Chatham’s sharp mind and quick thinking, and the insight of Erin Sommers, a beautiful, young journalist, the three make a powerful team gaining on their criminal.

It’s raining… it’s pouring, and a killer is on the loose in the rainy Sierra Hills of Washington State. No one is who they seem, and the plot thickens with every turn. You’ll never guess the ending of this enigmatic tale.

Buy And The Forecast Called For Rain Here

Sign up for our newsletter to find out about great mystery books. Once a month one subscriber will win one book from our site.
Filed Under: Featured Books, Mystery/Suspense/Thriller Series Tagged With: crime, fiction, mystery, seattle, serial killer, suspense, thriller