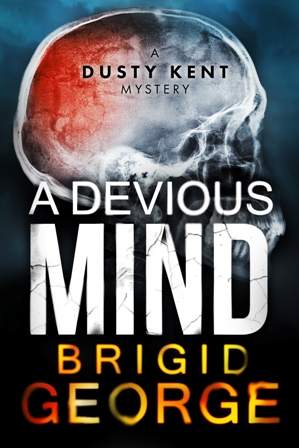 FREE! For a short time only.
It was a silent death. One blow to her head was all it took. The killer struck Marcia Hamilton, a sixty-year-old grandmother of slim build, from behind. Marcia’s status as a distinguished author could not save her. The killer rolled her body, ‘like a piece of discarded junk’, down into a gully where it remained for almost two weeks. The callous killer taunts Dusty Kent who has been called in to investigate.

‘A Devious Mind’ is an enthralling whodunit awash with mystery and atmosphere — from the message seemingly sent by the murder victim after her death, to the intrigue of family dynamics, to the ambling lifestyle of Byron Bay: Australia’s famous beach town. If you like a good mystery, don’t miss this one!

Sign up for our newsletter to find out about great mystery books. Once a month one subscriber will win one book from our site.
Filed Under: Featured Books, Mystery Books Tagged With: amateur private investigator, Australian detective novel, BrigidGeorge, cozy murder mystery, traditional whodunit, women sleuths