You are here: Home / Thriller / Cultivating Despair by Miik YS 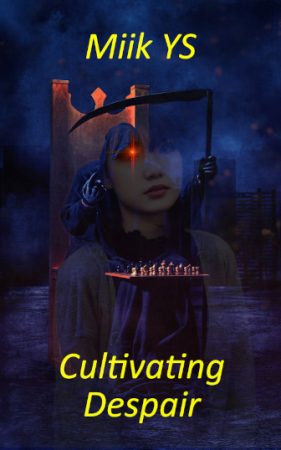 Death is easy; it’s life that’s hard. The Angel of Death, or AOD as he dubs himself, provides a public service by eliminating those he deems sleazebags. Because of his fascination with chess, he never attacks his targets directly. Instead, he takes those related to the target off the board one by one while tormenting his true victim until that target commits suicide.

Detective Hauteman is new on the job at the state police Major Crimes Homicide unit. She investigates a suspicious death others would rather classify as an accident. More bodies pile up. They seem like accidents, but always involving family members of the first victim.

Detective Hauteman’s captain suspends her for investigating the deaths even after he orders her to stop. With AOD selecting his targets based on his whims and planning moves steps ahead like any chess master, plus her captain growing more enraged when she refuses to cease investigating the deaths, Detective Hauteman struggles to unearth any detail to shed light on the killer.

What Inspired You to Write Your Book?
I set out to write a really scary horror story, but they're never all that frightening because the monsters aren't real. The monster in this story is all too real. He could be under your bed or in your closet right now. That creates a much more terrifying story.

How Did You Come up With Your Characters?
The characters all have multiple levels of meaning. For the names, use Google Translate to learn more about them. I've dealt with people who believed in more than just a paycheck and a place to show up from 9 to 5, so I tried to represent them here.

Book Sample
The Angel of Death spied CCTV cameras in the store through the front windows, so he lurked outside. From a couple doors down, he hovered as Jane slipped among the cars on the road to cross and place her purchase on the back seat of Target's car. She ducked into a store on that side of the street, but emerged empty handed a moment later. She crossed Main Street once again and headed away from AOD. He tailed her around a corner to even smaller shops.

The smaller shops on that street displayed no obvious security cameras, but they left nowhere to hide if he were to step inside while she haunted one of those shops. He huddled in a different shop's doorway, sheltered from the icy wind, until she emerged. As she toddled on the sidewalk approaching the curb to cross the street, with others going about their business all around, he glided up behind her. AOD nonchalantly hooked the belt of her overcoat with a finger to prevent her from crossing at a break in the traffic. She tried a second then a third time to step off the curb to no effect. She glanced over her shoulder. The blood drained from her face as she gazed up at AOD. A smile spread too wide across his countenance. He shook his head as he judged the timing of the cars.

AOD shoved Jane into the street in front of oncoming traffic although he pretended to be trying to catch her, just out of reach, clutching at the air. "Oh, no. Lady, be careful."
The vehicle closest to her swerved into the oncoming lane to avoid her. It plowed headlong into a car in that lane. The school bus behind the veering car failed to react as quickly, so its tires rumbled over Jane's body.

"Oh, dear God." AOD pretended to be distraught. "Someone please help her. I don't know if she fell or if she jumped. Is she okay? Oh, I hope she's okay. Did she jump into traffic? Did she fall?"

AOD faded into the background after planting the seeds in the minds of the bystanders. A crowd gathered around the bus as the students on their way home from school gawked out the windows. The chattering crowd grew quickly, so the Angel of Death stepped further back to take in the whole scene, including Target, without being a part of it.

The Russian chess master of AOD's imagination leaned close to the killer's ear. "Now that was masterful move. If I wore hat, I would take off to you. Bravo. You are back on track. I look forward to good game, yes?"

AOD giggled. "Aww." When a woman squinted at him, he pretended to be crying instead of chuckling. "Aww, it's so sad. How could this happen here?" He stepped away wiping his eyes and sniffling. From another vantage point, he spied on Target, not caring much about the unfortunate accident since it served its purpose and held no further value.

Target shoved his whiskey bottle in the glove compartment and checked his watch. He blew out a long breath, then noticing the scent of whiskey, he rolled down his window despite the chilly January day. The shouts of the growing gaggle of people around a school bus drew his attention. Snippets of conversations wafted to him. "Old lady… white hair… old coat… one of those reusable shopping bags with rope handles."

Target jumped out of his car. He took two steps into the street before he halted. He staggered back to his car to pull out and unfold his wheelchair. Only then he rolled between the backed up traffic on his side of the street from the head-on collision to the empty other side of the street since the bus blocked everything behind it. Ahead on the street lay his mother's reusable shopping bag with her lone purchase in it oozing onto the street.

A woman in the crowd directed a few men to stop Olaf. "You shouldn't see this. I'm sorry."

"What do you mean? You're sorry? What happened?"

"Your mother was hit by the bus. I'm sorry."

"Is she okay?" Olaf tried to work up tears.

The woman wept. She shook her head.

"Has anyone checked? The bottom of that bus is pretty high off the ground. Maybe she only banged her head or something." Olaf shouted.

The woman spoke softly. "No, dear."

"Someone has to check on her. She might be okay. She might only be unconscious. You have to check." He continued howling at the crowd.

"A few people already called an ambulance and the police."

A young man crawled under the bus from the front. He slid back out a moment later. He only shook his head.

"What. What does that mean?" Olaf rolled toward him.

"Then how do you know? You could be wrong."

The young man shook his head again as he lowered it.

"You don't know what you're talking about. She might be okay. What do you know? How many dead bodies have you seen? You're still a kid. You don't know anything, you stupid asshole."

"The tire ran over her body. Some of her torso is as flat as a pancake. Blood and guts squirted out her mouth. She isn't breathing. There's more blood on the road under there than there is left in her body. There. Is that what you wanted to hear? Do you get it now?"

The woman who first spoke to Olaf scowled at the young man, who wiped his eyes and stomped off, so she returned her focus to Olaf, muttering soothing sounds to him. AOD worked his way around the back of the crowd to sneak up behind Target. He struggled to hide his smile and to remain inconspicuous. As Target whimpered and begged for someone to help his poor mother, as he lamented what would become of himself, as he worked the crowd for sympathy, AOD leaned in to sniff Target now and then. The scent of despair intoxicated AOD and caused him to forget about everything else. A man placed a finger on AOD's black leather hood to push it back to see his face from the side, but AOD swatted away the hand.

"Were you sniffing him?" The man spoke in a low voice.

AOD pretended to be crying while stepping away from Target and keeping his face concealed. He kept his voice low so only the man beside him heard him. "Don't be silly." He sniffled several times. "What kind of cold hearted monster are you that you aren't driven to tears by the death of a sweet old woman that's left her disabled son to fend for himself." He bawled uncontrollably as he shambled away.

Author Bio:
The story is important, not me. I craft stories that are enjoyable at a surface level. The works include other levels of imagery, symbolism, and meaning should the reader want to delve deeper into the stories.

Sign up for our newsletter to find out about great mystery books. Once a month one subscriber will win one book from our site.
Filed Under: Thriller Tagged With: MiikYS Thriller detective creepy stalker female-lead