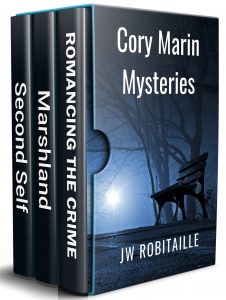 1. Romancing the Crime
“Compares favorably to Harlan Coben.” Amazon Reviewer
“A fast-paced book that kept me wound up tighter than a drum all the way through.” Amazon Reviewer
Sgt. Cory Marin, head of homicide, has her hands full. Not everyone on her squad is happy she’s in charge, she’s still dealing with the break up of her marriage, and wealthy residents are up in arms over the murder of a young professor in broad daylight in Ravine Creek, a proposed city park where she jogs every day. Cory is convinced that what appears to be a random robbery gone wrong is premeditated murder. Her job is complicated by the appearance of Fletcher Manning, a bestselling novelist who shadows her as research for a female detective novel he is writing. She has her guard up, but as she gets to know him, she softens and begins to fall for him.
2. Marshland
“Marshland is fantastic sequel to Romancing the Crime. Cory Marin returns as the strong female lead detective whose instinct and tenacity make the novel a page-turner. The novel contains all new mysteries, twists and turns but with the same likable cast of characters and dialogue. This is shaping up to be a great female detective series.” Amazon Reviewer
“Great character development that makes you feel like you know each of them. Intrigue and suspense abound and twists and turns keep you turning the pages. Wonderful book- fun read!! Love it!!” Amazon Reviewer
Sergeant Cory Marin and Detective Washington investigate the overdose death of a college student and find that everyone involved is lying or has something to hide. The more questions they ask, the more they suspect something very bad has happened. When the corpse of a young man is found in a swamp, their suspicions are confirmed. Their investigation leads them to the creeks and marshes of the Gulf coast, a land of small towns, fishermen, and smugglers, and they discover a subculture of drug importers, dealers, and users, a world dominated by greed.
As Cory struggles to untangle a story of innocence gone awry, she wades through an emotional marshland of her own as she adjusts to the idea that she will be a mother herself. How can she protect her child from the dangers he or she will face?
With so much in flux in her life, her partnership with Washington provides a stabilizing influence, but as their friendship deepens, her feelings for him threaten to upset the fragile stability of her world.
3. Second Self
“I have read all three books in this series and this is my favorite. I could not put it down. Great summer reading!” Amazon Reviewer
“Once again JW Robitaille has written a fast-paced, can’t put it down police procedural featuring Cory Marin, her tough Latina detective, who is holding her own in a southern police department in a university town. There is nothing more fun than a new Cory Marin novel. Highly recommended!” Amazon Reviewer
When Sergeant Cory Marin and Marty Washington begin to investigate the ritualistic murder of an international student, the leads and suspects keep multiplying. Is the killing tied to a similar one twenty years ago? Is the girlfriend’s possessive ex-boyfriend responsible? Do the victim’s fraternity brothers have a reason to want him dead? Or are the victim’s girlfriend or best friend involved?
When they discover a tie-in with the virtual world, Second Life, events take a bizarre twist. As her avatar tracks down leads in Second Life, Cory is faced with a new threat from Fletcher Manning. Luckily, she has Marty Washington, and her father, Jack Riley, in her corner, but can they protect her from Fletcher?

What Inspired You to Write Your Book?
I was inspired to write the novels in this box set, Romancing the Crime, Marshland, and Second Self, by a desire to show a strong female detective committed to protecting the weak who must grapple with the complexities of modern society. All three are fast-paced police procedurals featuring Sgt. Cory Marin, a strong woman with a complicated love life and a diverse group of friends. Cory battles self-doubt but holds her own in a male profession.

How Did You Come up With Your Characters?
I wanted my heroine, Cory Marin, to be emotionally complex, and I wanted her to be an outsider. She was born in New York to a Puerto Rican mother and an unknown father, so she is mixed race and must grapple with issues of identity, trust, and acceptance in a male profession. Her friends are a mixture of races, ethnicities, and sexual identities (gay and straight) because I wanted to represent multi-faceted perspectives on modern life.

When she stepped out of headquarters, the air was warm and humid, too warm for October, too warm for a run. She could feel moisture pop on her forehead as she crossed Sixth Street, where traffic obediently stopped at the crosswalk. Crosswalk compliance hovered around sixty percent citywide, but compliance was one hundred percent where the pedestrians were officers with guns on their hips.
She had to click her key fob to find her car since most of the cars in the lot were silver city issues. The Taurus wouldn’t have been her first choice, but it was a hell of a lot better than the Chargers and Impala most of the department drove. An Accord would have suited her better, but the department had bowed to mileage concerns only recently, and Washington was the first to be assigned one.
When she turned the key, Mary Gautier’s plaintive voice wailed about not being able to trust her eyes anymore, and Cory sang along for the umpteenth time because nothing came closer to summing up her and Mike. She hadn’t been able to see what was in front of her because desire blinded her.
Her friend, Brandy, had pushed the CD across the table of the Palomino after one of his trips to New Orleans, The Big Easy, he called it, saying it like the first word referred to organ size and the second to difficulty level.
“You’ll love her,” he said. “It’s like she’s channeling Steve Earl.”
Brandy taught in Cultural Studies, a department where no one was over forty, and everyone dressed like he was a subject of one of his own lectures. Brandy looked like he belonged on an album cover rather than in the classroom. His jagged blond hair stuck out in carefully arranged mayhem; his usual outfit was a pale linen jacket over a T-shirt, skinny jeans, and crazy tennis shoes. Cory had no idea tennis shoes came in so many colors and varieties—lime green, coral, checkerboard. He was a man after her own heart when it came to shoes. You could never have too many.

At the light, she hesitated a fraction of a second before turning right. It was too hot to run, which meant she had time for a quick duck-in at the Goodwill. She parked in the shade of a plane tree, the pavement hot and littered with huge dry leaves curled up like human hands.
The AC inside the store was a relief. She cruised by the crystal and china without breaking stride. She didn’t need anything anymore. It wasn’t about need. It never was. She had boxes of Limoges china and embroidered tablecloths. Never mind that she didn’t have a dining room table because the idea of sitting down to dinner alone depressed her beyond reason. She had a closet full of party dresses that fit like a glove, never mind that she had no place to wear them and no one to go out with, but for five dollars, who could say no?
She recognized that her stops at Goodwill bordered on compulsion, that she was trying to make up for everything she hadn’t had as a kid, when if she had cash for school lunches or clothes or bus fare, it was only because she stole it from her mother’s purse. She had told herself her mother would have given her the money if she had been able to notice that Cory needed anything, but noticing Cory and taking care of her were more than her mother could manage. She had more pressing concerns with making sure she had enough cigarettes and booze and drugs to get through the night.
Luckily, Goodwill could make up for all that.
She was headed for the dress racks when she was drawn like a bee to honey by a rack of Halloween costumes. There were tulle princess dresses and mesh angel wings bordered with glitter. She fingered the blue satin skirt of a Belle dress, a hole suddenly opening inside her. Her hands longed to dress a little girl for Halloween, to nestle a tiara in her curls. The chasm yawned before her, and she turned and hurried out of the store before her entire life was sucked into that black hole.
It was for the best, she told herself. But the question persisted: What would her life be like if she had gotten pregnant with Mike? She had wanted a baby badly enough to consider going off the pill even though Mike’s attitude was always, “Not ready. Not yet. No way.”
It was for the best, she repeated as she unlocked the car. She couldn’t see sharing custody with him now, having to drop a child off at his house and negotiate with whoever the current live-in girlfriend happened to be. Besides, she couldn’t be relied on to pick a kid up from school or be home for dinner by six, let alone show up to soccer games and school plays. The girls she tutored at the center were about as much commitment as she could manage. If she didn’t show up, no one suffered too badly.

When she buckled her seatbelt and turned the key in the ignition, she heard the dispatcher call for the closest unit to respond to a shooting in Ravine Creek, the Twenty-third Street entrance near the Elk’s Lodge. Shit, that was where she ran. How could a shooting happen in broad daylight in Ravine Creek? If she hadn’t stopped at Goodwill, she might have been on the trail now. She might have witnessed the crime. Hell, she might have been the victim.
She radioed dispatch that she was responding, buckled her seat belt, and headed for the scene.

Author Bio:
JW Robitaille received degrees in English from Emory University, the University of North Carolina Chapel Hill, and the University of Florida. She lives in Gainesville, Florida, the setting of all her fiction. In addition to being the proud mother of two grown boys, she is an avid walker, painter, gardener, traveler, and house restorer. She is the author of a Gainesville detective series, literary fiction, short stories, screenplays, and is getting ready to launch a Young Adult dystopia series (think hopeful, think Parkland kids taking action).

Sign up for our newsletter to find out about great mystery books. Once a month one subscriber will win one book from our site.
Filed Under: Mystery Books Tagged With: contemporary romance, detective series, female protagonist, JW Robitaille, police procedural, psychological, small town detective, suspense