You are here: Home / Thriller / City of Dark by CH Dickinson 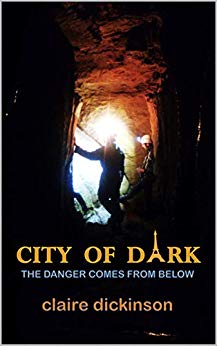 The Paris catacombs. The city’s subterranean shadow. Hundreds of kilometers of tunnels. A land of history and legend, where the underground explorer treads a fine line between reality and irreality. As the top inspector on the counter-terror squad, Khalid Sadiqi thought he knew everything there was to know about the City of Light’s weak spots. But this is new. This is the City of Dark. Seeking to learn more about the world below the city, Sadiqi stumbles on the impish help of Antonia Corrigan. The vibrant young engineer heartens the jaded inspector. Not only can she wend her way through her underground playground with lively agility, she also knows all the myths and legends that will prove to be the key to unlocking the mysteries. But will her knowledge of the tunnels below ground be enough to stop the mayhem above?

What Inspired You to Write Your Book?
There are hundreds of kilometers of catacomb tunnels below Paris. I started wondering what would happen if those tunnels were taken over by terrorists.

How Did You Come up With Your Characters?
The characters grew out of the situation quite spontaneously. I also wanted them to be contemporary and socially diverse.

Book Sample
But she also knew it was hard for most people to see the beauty of the quarries in a world that had become convinced that clothes, the stock market and expensive cars were the manna of humanity. That was precisely what she liked about her underground world. To use a pun, she found the surface superficial. The fashions, the shows, the restaurants, the politics. “Most people nowadays are too busy worrying whether they’ve got the right animal sewn on their polo shirt to think about exploring the quarries. I’m not really into consumer society. I prefer the atmosphere below. Life underground isn’t about the illusion of appearances. It’s raw down there. It’s real. You can be yourself.”

Author Bio:
C.H. Dickinson was born in Canada but has spent most of her life in Paris, with extended stopovers in London and Prague. She holds a doctorate in Economics from Pantheon-Sorbonne University and teaches in French higher education. She has published two novels and is currently working on the sequel to City of Dark.

Sign up for our newsletter to find out about great mystery books. Once a month one subscriber will win one book from our site.
Filed Under: Thriller Tagged With: catacombs, female protagonist, France, investigation, Paris, police, suspense, terrorism, thriller