About The Twin Murders:
Teaching can be murder!

When a private school teacher is found raped and murdered, David Graham is assigned to the investigation, his first major case since being shot by his former partner, Alexis Hamilton. When a second teacher is murdered, David realizes the cases are related and the school is being targeted. With the help of his new partner, he sets out to find the killers and stop the murders.

Giving the cases his full attention becomes difficult, however, when Alex escapes from the hospital where she’s been confined. She begins stalking David, threatening to harm everyone he cares about. Can he protect his loved ones from Alex and find the killers targeting teachers at the same time?

END_OF_DOCUMENT_TOKEN_TO_BE_REPLACED 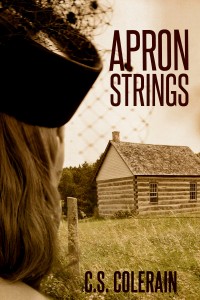 About Apron Strings:
In the small backwards town of Creekwood, little is forgiven or forgotten over the span of fifty years. The damaged lives of one generation spread into the next leading to the death of a young man, reportedly an accident, but clouded in suspicion. Years later, when many secrets are threatened with exposure, those affected scramble to fiercely protect the past they had struggled so hard to conceal. When a woman, reviled by many, ends up murdered, almost everyone, including her oldest friend, is suspect. Apron Strings, dark and edgy, will grab your attention and keep you guessing until the very last page.

END_OF_DOCUMENT_TOKEN_TO_BE_REPLACED

About Sweet Karoline:
If I knew what I know now, would I have searched so hard for the truth?

Anne Williams says she killed her best friend, Karoline. But did she? Or is there more to Karoline’s mysterious death than meets the eye? Anne embarks on a compelling journey to discover her past and exposes an unusual history, horrific crimes and appalling betrayals. Through unexpected turns and revelations, Anne learns about love, family and who she really is. Can she survive the truth?
“A deliciously vibrant portrait that realistically muddles good and evil.” – Kirkus Reviews

END_OF_DOCUMENT_TOKEN_TO_BE_REPLACED 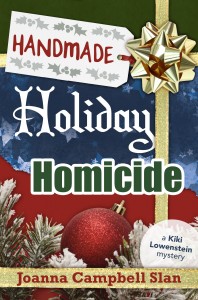 About Handmade, Holiday, Homicide:
Super-crafter Kiki Lowenstein is cramming as much into the ho-ho-holiday season as she can. But Kiki’s ambitious plans come to a crashing halt when her student, Eudora Field, drops dead at the start of one of Kiki’s community center classes. An overeager security guard is convinced that Eudora didn’t make her transition without help. Now it’s up to Kiki to determine who was nice, and who was very, very naughty, indeed.

END_OF_DOCUMENT_TOKEN_TO_BE_REPLACED 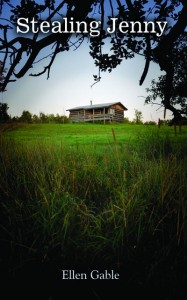 About Stealing Jenny:
What do you get when you have a full-term pregnant mom with a dangerous medical condition and a mentally unstable infertile woman who is desperate to have a baby? “Stealing Jenny” is about Jenny Callahan, mother of five, who is hoping to have more children. After three miscarriages and some difficult moments during her current pregnancy, Jenny is only a week from delivery and feels like she is ‘home free.’ However, her neighbor is secretly hatching a plot that will put the lives of Jenny and her unborn baby in danger. “Stealing Jenny” by Ellen Gable is a faith-based suspense novel with over 350 four and five star reviews on Amazon.

“The Examiner” says: “It’s tightly written, nice and tense, complete with character studies, personal histories, and one of the better bad guys I’ve seen in a while.”

END_OF_DOCUMENT_TOKEN_TO_BE_REPLACED

About Dangerous Habits:
A cryptic note from a dead nun compels reporter Leah Nash to dig into the accidental death of her younger sister at a school run by Catholic nuns. No one — not the nuns at the school, the priest who mentored her sister, the wealthy politician on the board of the school, not even her own publisher wants her to pursue the story. But Leah, equal parts smart and smartass, just can’t quit. As she starts closing in on the truth, someone starts closing in on her. Then, just when she’s got it all figured out, a stunning revelation changes everything, and sets the stage for an ending you won’t see coming. Leah’s always been willing to kill for a good story, but will she die for one?

END_OF_DOCUMENT_TOKEN_TO_BE_REPLACED

About The Purloined Angel:
This is the perfect gift for Christmas because the book is set around Christmastime. It is a lighthearted mystery with humor and twists and turns. It appeals to mystery lovers of any age.
Betty Brown has a problem on her hands. It is Christmas and there is no joy on earth for her this season. Betty’s retirement community has turned on her. They think she committed a crime that is inexcusable. Join in on the hunt in this who dunnit.

END_OF_DOCUMENT_TOKEN_TO_BE_REPLACED

About Burning Ties:
Allyson Roberts has risen from the ashes. She now has a career, a relationship, and a purpose in life. But as a new assignment comes along, Jake Morrissey, the man who helped her rebuild her life and has been her rock ever since might now become too dangerous for her to love. Will Ally and Jake find a way to be together, or will their ties burn them?

Delilah Jones has always been the odd one out with a wayward past. Now, she has a chance to shine by completing an undercover assignment that has her colleagues at a standstill. But what if getting a lead will cost Delilah her only chance for true love? Will she have to choose between her heart and career, or will she find a way to have both?

END_OF_DOCUMENT_TOKEN_TO_BE_REPLACED

About Stalking Season:
This is the second book in the Seasons Mystery Series featuring homicide detectives Sarah Kingsley and Angel Johnson, unlikely and unwilling partners. Think “Lethal Weapon” set in Dallas with female leads. The murder of young Tracy Clemment is the kind of high-profile case that detectives hate and the press eats up, especially when the father is a Dallas high-roller.

STARRED Publishers Weekly Review
“ . . . gripping second mystery featuring Dallas, Tex., police detectives Sarah Kingsly and Angel Johnson. . . . The relationship between the women is just as absorbing as the search for the killer. Few readers will anticipate the closing twist.”

Kirkus Review
“So deftly plotted and paced that, although it’s certainly possible to grow impatient with the protagonists’ unwarranted impatience toward each other, they’re appealing enough to keep the pages turning.”

END_OF_DOCUMENT_TOKEN_TO_BE_REPLACED

About Trespass:
A brand-new novel, a sequel to She’s Not There, starring private investigator TJ Peacock and Lisa Rayburn.

A deadly house explosion nearby lures investigator TJ Peacock to the site of the fire where she meets Gemma, a woman tortured by the death of a friend who died in the explosion.

Gemma, struggling with the ghosts of her past, is convinced the explosion was deliberate, and hires TJ to find out who murdered her friend. TJ takes the case and returns to the work she loves, despite feeling guilty about the responsibilities of motherhood and the attitude of her long-time lover, Detective Richard Conlin.

When a series of attacks and a murder take place in the same neighborhood, TJ unearths a bizarre connection to a sixteen-year-old double suicide of a couple who were partnered in a swingers’ group. A killer is trying to eliminate everyone who had been players in the group.

The clock is ticking as TJ tries to unravel the mystery before more people are killed.