You are here: Home / Cozy / A Caterer’s Guide to Love and Murder by Jessica Thompson 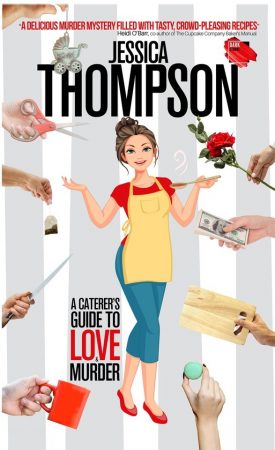 A wedding caterer, a florist…and a dash of poison.
“Wow, this dough is sexy!”
As their wedded bliss starts to show signs of serious strain, Violet and her new husband, Jake, put their feelings aside to focus on catering a wedding that could make or break her career.
When murder ruins the rehearsal dinner, and her sister, Greta, the florist, becomes the prime suspect, Violet risks everything to clear her – and still deliver the beautiful wedding her new friend deserves.
But will she be in time before the killer dishes out seconds?
A Caterer’s Guide to Love and Murder takes you on a culinary journey you won’t forget!

What Inspired You to Write Your Book?
When I discovered mystery novels with recipes, I knew I had found my niche!
I got to include my favorite recipes AND weave a complex mystery!

How Did You Come up With Your Characters?
Some inspiration from real people and lots of names that I couldn't use on my kids

Author Bio:
When Jessica discovered mystery novels with recipes, she knew she had found her niche.

As an avid home chef and food science geek, Jessica has won cooking competitions and been featured in the online Taste of Home recipe collection. She also tends to be the go-to source for recipes, taste-testing, and food advice among her peers.

Jessica is active in her local writing community and is a member of the Writers’ League of Texas. She received a bachelor's degree in Horticulture from Brigham Young University but has always enjoyed writing and reading mysteries.

Jessica is originally from California, but now has adopted the Austin, Texas lifestyle and loves to smoke barbeque, shoot, ride, and wrangle. She enjoys living in the suburbs with her husband and young children, but also enjoys helping her parents with their nearby longhorn cattle ranch.